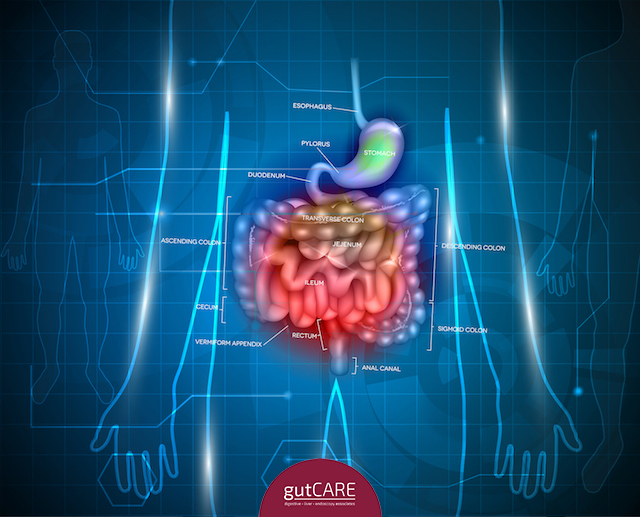 Our Gastrointestinal tract is made up of cells that are constantly undergoing wear and tear, hence regeneration and cell growth occurs constantly. Sometimes, as with other parts of the human body, this cell division can go wrong, resulting in cancer forming.

This is a cancer of the gullet or swallowing tube. There are certain conditions, such as Barrett’s esophagus, or lifestyle habits such as smoking or heavy alcohol use that can predispose to it. Symptoms include difficulty in swallowing.

Gastric cancers can arise from a number of conditions. Primary of which is a chronic Helicobacter Pylori infection. The presenting symptoms include upper abdominal pain or bleeding into the gut. If there is H Pylori infection, then eradication of the bacteria markedly reduces the cancer risk.

This is a malignancy of the pancreas, an organ that is involved both in digestion as well as hormone production. It tends to be silent cancer, and symptoms only occur in the late stages.

Cancers of the colon and rectum rank as the commonest malignancy in Singapore, and is unfortunately often detected late. However, like breast and cervical cancer, it is amenable to early detection via screening. Colorectal cancer often develops from a small polyp (or growth) in the intestines, and if detected and removed early, avoids its development into cancer.

Cancers of the liver can be divided into primary liver cancers or secondary cancers, meaning cancer has spread to the liver from another part of the GI tract. Primary liver cancers, or hepatocellular carcinoma, often arises in patients who have liver hardening due to long-term excessive alcohol use or chronic infections by viruses such as Hepatitis B.

Gut lymphomas are relatively rare, but most often occur in the stomach and small intestines. In the stomach, long-term H Pylori infection is the commonest cause. Like lymphomas in other parts of the body, they do respond well to chemo and radiotherapy.