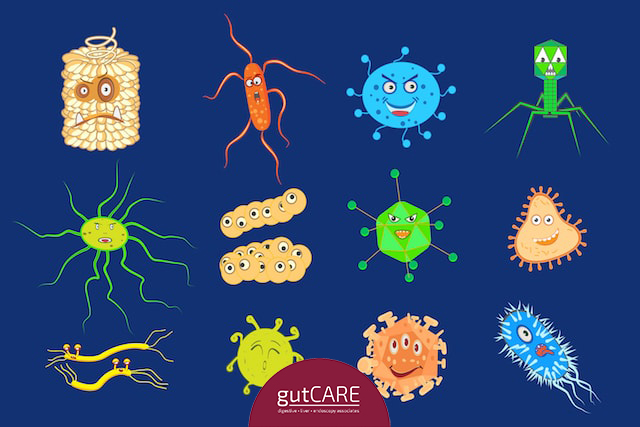 Most gastroenteritis or gut infection presents as acute diarrhea with or without vomiting, fever, and abdominal pain.

Diarrhoea is defined as the passage of loose or watery stools, typically at least three times in a 24-hour period. Invasive diarrhoea, or dysentery, is defined as diarrhoea with visible blood or mucus, in contrast to watery diarrhoea. Dysentery is commonly associated with fever and abdominal pain.

The majority of acute infectious diarrhoea are caused by viruses (norovirus, rotavirus,others). Stool cultures are positive in only approximately 5% of cases in most studies for bacteria (Salmonella, Campylobacter, Shigella, enterotoxigenic Escherichia coli, Clostridium difficile, and others). However, bacterial infections account for >80% of cases of severe diarrhoea. Symptoms occurring within six hours of ingestion strongly suggest a preformed toxin of Staphylococcus aureus or Bacillus cereus, particularly if nausea and vomiting were the initial symptoms. Protozoa (Cryptosporidium, Giardia, etc) are less commonly identified as the etiologic agents of acute gastrointestinal illness.

Most adults with acute diarrhoea do not present to medical care because of the mild or transient nature of the symptoms. For those who present to their doctor, the initial evaluation will include a thorough history taking into account potential exposures, including a food history, residence, occupational exposure, recent and remote travel, pets, and hobbies. These can also provide further diagnostic clues as to a potential cause.

Your gastroenterologist will also perform a physical examination to assess for signs of dehydration and determine the length of symptoms, the frequency and characteristics of the stool, and associated symptoms (eg, fever and peritoneal signs). Fever, bloody or mucoid stool may suggest infection of the large bowel, which is associated with pathogens distinct from small bowel infection.

Your gastroenterologist will ask for standard stool cultures or multiplex molecular testing and microscopy for ova and parasites.

The most critical therapy in diarrheal illness is rehydration, preferably by the oral route, with solutions that contain water, salt, and sugar. Adults with severe dehydration should initially receive intravenous fluid infusion combined with oral rehydration.

Empiric antibiotic therapy is not routinely recommended for most patients with community-acquired diarrhea without a history of travel. Antibiotic therapy can reduce the duration of diarrhea and other symptoms by several days but does not alter the overall outcome in general and the decision has to be weighed up against the potential side-effects..

However, in selected cases, empiric antibiotic treatment may have a greater relative benefit, such as patients with severe disease, features suggestive of invasive bacterial infection (bloody or mucoid stools), or co-mobidities that increase the risk for complications.

For patients who desire symptomatic therapy, the antimotility agent loperamide can be used cautiously in patients in whom fever is absent or low grade and the stools are not bloody. For patients with clinical features suggestive of dysentery (fever, bloody or mucoid stools), we suggest avoiding antimotility agents unless antibiotics are also given because of concerns of prolonging disease in such infections In such patients, bismuth salicylate is an alternative.

Boiled starchy foods and cereals (eg, potatoes, noodles, rice, wheat, and oat), crackers, bananas, soup, and boiled vegetables with salt are encouraged in patients with gastroenteritis. Foods high in fat should be avoided. Dairy products should also be avoided due to secondary lactose malabsorption, which is common following infectious enteritis and may last for several weeks to months. Thus, temporary avoidance of lactose-containing foods is reasonable.