Helicobacter Pylori (H. pylori), previously known as Campylobacter pylori, is a Gram-negative, microaerophilic bacterium usually that thrives in the stomach. Australian scientists Barry Marshall and Robin Warren discovered the bacteria in 1982 and won a Nobel Prize for the discovery. Their research showed proved that Helicobacter Pylori that it was present in a person with chronic gastritis and gastric ulcers, conditions not previously believed to have a microbial cause. More than 50% of the world’s population is infected with H. pylori. Infection occurs more commonly in developing world than in the West. Infected individuals have a 10 to 20% lifetime risk of developing peptic ulcers and a 1 to 2% risk of acquiring gastric (stomach) cancer.

H. pylori is contagious, although the exact route of transmission is not known. Transmission between people probably occurs through either oral–oral or fecal-oral routes. In line with this, H. pylori have been isolated from feces, saliva, and dental plaque of infected individuals. Transmission occurs most commonly within family groups in developed nations, but can also be acquired from the community in the developing world. 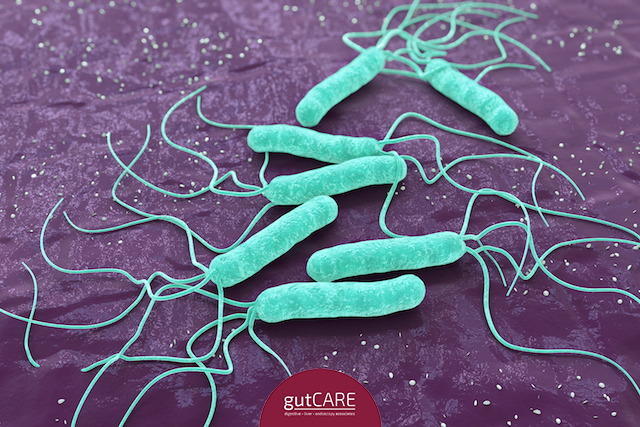 A large majority of individuals infected with H. pylori are asymptomatic and may not develop any complications. Pain characteristically occurs on an empty stomach or between meals, and in the early hours of the morning. Other symptoms may include nausea, vomiting, and loss of appetite. Gastrointestinal bleeding can also occur; leading to anemia, fatigue and even syncope. If bleeding is uncontrolled and rapid, patients may present with symptoms such as melena (black tarry stool) or hematemesis (vomiting blood).

H. pylori is specialized in its unique ability to colonize the stomach. It induces inflammation (gastritis) of the gastric mucosa (lining). H. pylori is a classic symbiote in that it is able to persist in an individual’s stomach for decades. The age of initial infection appears to be associated with the potential outcome of infection. People infected at an earlier age are likely to develop more extensive inflammation, gastric atrophy and a higher risk of gastric ulcers and cancer. The majority of infections occur in early childhood in all countries but the overall rates of infection do rise with age. Most individuals infected by H. pylori never experience clinical symptoms, but about 10–20% ultimately develop ulcers. H. pylori infection is associated with a 1–2% lifetime risk of gastric cancer and <1% risk of gastric MALT lymphoma.

Testing is not routinely recommended in the general population. However it should definitely be tested for in individuals is diagnosed with peptic ulcer disease, low-grade gastric MALT lymphoma, early gastric cancer, is a first-degree of a patient with gastric cancer, and in cases of chronic dyspepsia.

Extensive research has shown that the treatment of H. pylori reduces the risk of gastric cancer in previously infected individuals, suggesting the continued presence of H. pylori is a risk factor in 65% for gastric cancers. The standard first-line therapy is 14 days of “triple therapy” consisting of proton pump inhibitors such as omeprazole and the antibiotics clarithromycin and amoxicillin. An increasing number of infected individuals (up to 15% to 20% in some countries) are found to harbor antibiotic-resistant bacteria, particularly to clarithromycin and metronidazole. This usually results in treatment failure to first-line treatment regimes and requires additional rounds of antibiotic therapy or alternative strategies, such as a quadruple therapy, which adds bismuth subsalicylate. Lactic acid bacteria have also been shown to exert a suppressive effect on H. pylori infection in both animals and humans and your doctor may prescribe a course of probiotics together with your antibiotics to facilitate successful eradication.